CalPERS and CalSTRS manage portfolios worth $466 billion and $323 billion, respectively, so it’s natural for these public pension funds to throw around large numbers. But evidence from the funds themselves and from independent analyses suggests that PERS and STRS wildly exaggerate both the transaction costs and the opportunity costs of divestments in general.

And in the California Senate Informational Hearing on Pension Funds on March 9, 2022, CalSTRS CIO Chris Ailman asserted that “every divestment has cost us money.” He added that the “thermal coal divestment has come the closest to breaking even,” but still represented a loss for the portfolio.

To test this assertion about the impact of divesting from thermal coal, UC Berkeley Economics students Lanie Goldberg and Owen Doyle charted the value of a $10,000 investment over the years 2015-2021 for the seven thermal coal companies that CalSTRS divested [mandated by SB185 to be completed by 2017], and compared the performance to standard benchmarks and the CalSTRS portfolio as a whole. 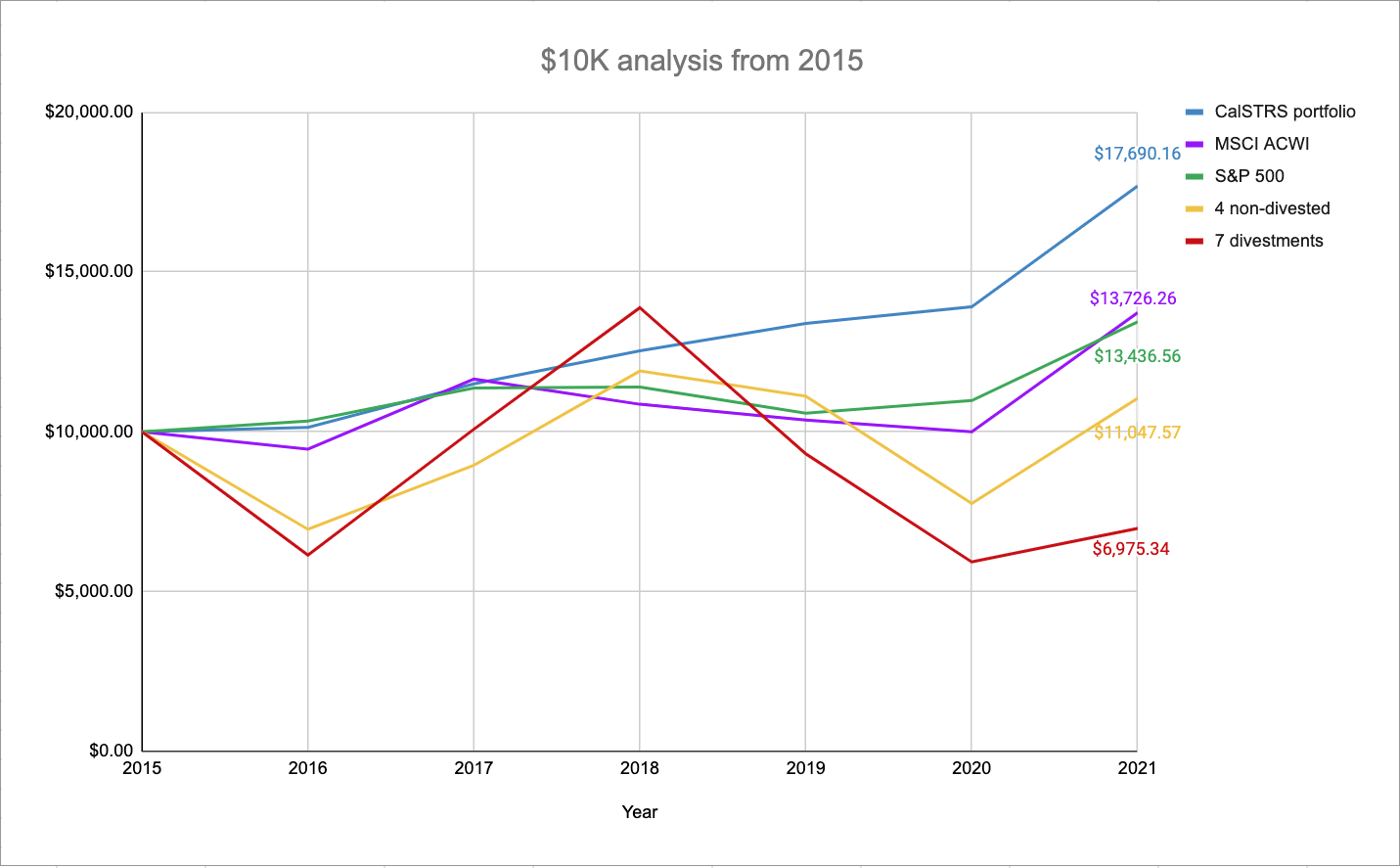 The above chart estimates the returns on an investment of $10,000 from 2015-21 (as of June 30 close for each year) under various scenarios.  Performance of  the 7 divested thermal coal companies (red) is plotted along with the CalSTRS portfolio (blue), and standard benchmarks S&P 500 (green) and the MSCI ACWI (purple).

Background Reference: What Was Divested?

Table 1: Share Price History of Divested Companies (closing share price on June 30th of the given year). The “0” values represent bankruptcy or a pause in trading (Peabody).

Like other fossil fuel investments, thermal coal investments are risky and volatile. Staying invested in fossil fuels has cost both CalSTRS and CalPERS billions in lost value over the years. For example, Peabody Coal (divested by both Funds in response to SB 185) had already lost most of its value by the time it was divested. And, even with surging coal share prices, Peabody Coal is still not a good investment. Despite recent price spikes, Peabody (bankrupt 2016; reorganized 2017; fluctuating wildly ever since) has returned -3.54% over the past 5 years, according to Yahoo! Finance charts.

By its own admission and confirmed by the UC Berkeley analysis, there’s no way that divestment of seven (7) thermal coal companies cost CalSTRS money. In fact, restricting these investments prevented CalSTRS from losing millions. The real question is, “Why didn’t CalSTRS divest sooner?”

← CalSTRS Tunes Out Teachers to Engage with ExxonWhat Does Divestment Cost? Misinformation from CalPERS and CalSTRS →
Scroll To Top