CalPERS has large holdings in the major banks that finance the oil, gas, and coal industry. Fossil fuel companies depend on large-scale bank funding to finance new exploration, development and infrastructure projects. Even after the 2015 Paris Agreement, the biggest banks continued to increase their financing of the fossil fuel industry. Rainforest Action Network reports that thirty-five large banks spent a total of $2.7 trillion on nonrenewable energy projects since 2016. Approximately one-half of the 35 banks showed an increase (averaging 8.14%) in funding for fossil fuel projects from 2018 to 2019 alone. Many banks with the largest investments in fossil fuel companies even increased the proportion of their total assets in the fossil fuel industry.

JP Morgan Chase is the largest fossil fuel financier worldwide, having poured $268 billion into fossil fuel extraction, development, and infrastructure expansion during 2016-2019. Wells Fargo has its own claim to fame: it’s number one on the charts for investments in fracking.

Table 1 shows bank funding for fossil fuels in rank order, with the percent increase (or decrease) in fossil fuel holdings during 2016-2019.

CalPERS has remained significantly invested in the top 12 fossil fuel financiers (see Figure 2a), with holdings of $8.83 Billion in 2018 and $6.82 Billion in 2019. While there were decreases in asset-backed securities (securities deriving value from underlying nonliquid assets such as small loans) and in domestic cash equivalents (eg, US Treasury Bills, Certificates of Deposit), virtually every other category showed increases. In Figures 2b & 2c, “equity” includes both domestic and international, and “securities” includes both asset and mortgage backed securities.

Furthermore, these top 12 FF-financing banks accounted for about 48% of CalPERS total investments in banks in 2018 and nearly 71% in 2019. 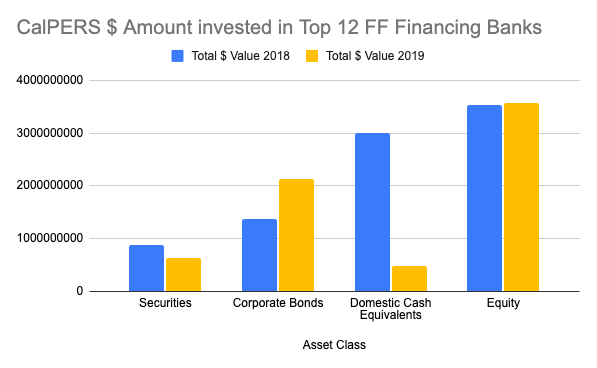 All six of the largest US-based banks have recently pledged to reach net-zero emissions by 2050. Last year, Citigroup joined the UN’s Principles for Responsible Banking, and a shareholder resolution requesting JP Morgan Chase to align its financing with the Paris Accord failed only narrowly. At least on paper, banks are responding to pressure to disclose the carbon footprint of their financing and align their financing with a 1.5 degree scenario.

Prior to these pledges, the five banks made various adjustments to their lending to fossil fuels during 2016-2018, after the passing of the Paris Agreement (Figure 3). We observe a small decrease by Goldman Sachs, minor changes by JP Morgan and Citigroup, and a notable increase by Wells Fargo. JP Morgan Chase still leads by a wide margin.

CalPERS’ total bank investments declined noticeably between 2018 and 2019 (see Figure 5). However CalPERs still held $9.6B in bank assets in 2019 and has remained significantly invested in 4 major US Banks (see Figure 6) that are major providers of loans to Big Oil and Gas. 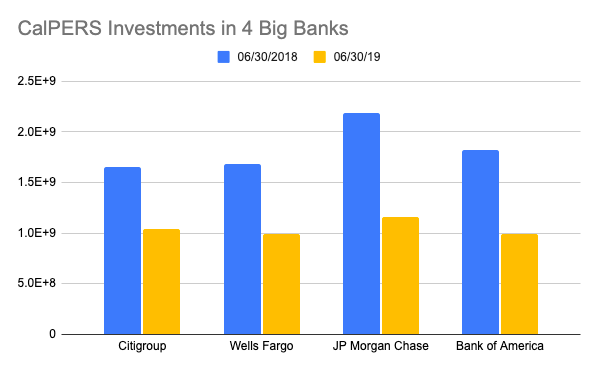 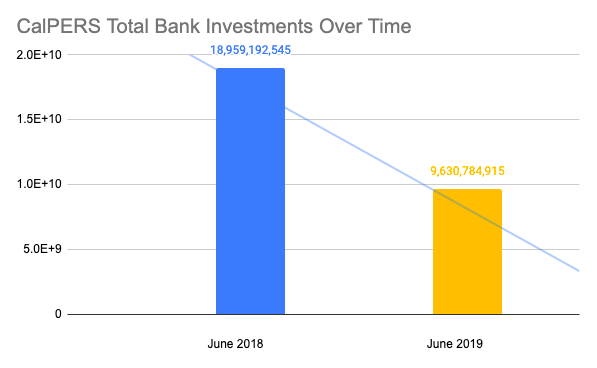 Although the total amount held in bank assets declined, many newly acquired assets were longer-term bank bonds: in fact, the corporate bond share of the portfolio more than doubled. (See discussion under section on bonds above). Figures 7a and 7b show CalPERS total bank investments in the 2018 and 2019 portfolios by asset type.

This analysis shows that CalPERS dramatically reduced its cash position in banks (including the aforementioned top 12 banks), and is increasingly investing in international banking institutions (mostly Canadian and Chinese banks) as shown by the growing “International Equity” segment.

This is notable for a number of reasons. Long-term investments in bonds carry risk related to inflation and interest rate volatility. The CalPERS portfolio increased participation in riskier long-term bonds, with a notable increase in bonds that mature as late as 2099. The average rate of return for these investments by years-to-maturity is shown in Figure 9. In the 2019 portfolio, the average rate of return for bank bonds maturing in 2099 was 6.57%, while the average interest rates for bank bonds maturing between 2030-2049 was 5.74%, which provides less than a 1% increase in return as “compensation” for 50+ more years of market exposure. 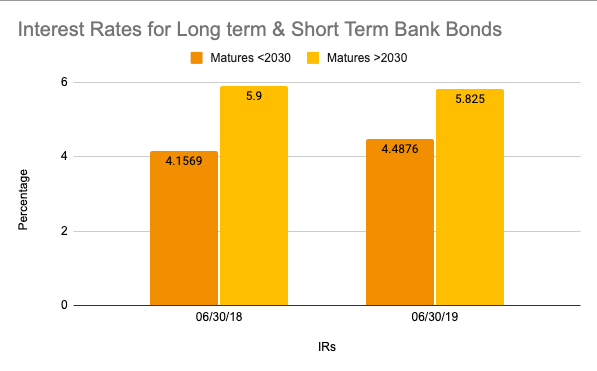 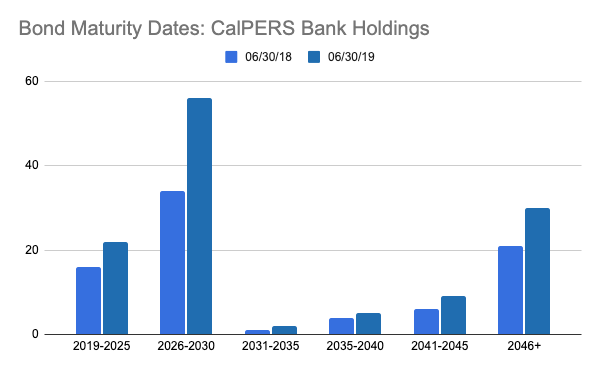 ← I Broke Up with My Banks!CalPERS: Finish Mandated Thermal Coal Divestment →
Scroll To Top